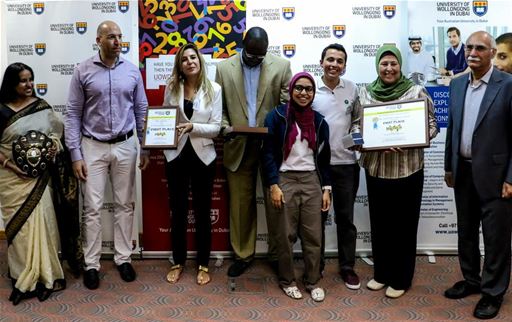 Two students from the International School of Choueifat – Sharjah (ISC-Sharjah) in the U.A.E. dominated the University of Wollongong in Dubai (UOWD) Mathalon, a competition designed to generate excitement about math. Although the competition, which brings together students from all over the U.A.E., has been held since 2006 in association with UOWD, it was the first time that students from ISC-Sharjah participated, making the outcome even more exciting.
The event took place on October 3, 2015, at the Dubai Knowledge Village and included 147 students from 27 schools across the U.A.E. The competition, which focused on advanced calculus, statistics, and critical thinking, all with an undercurrent of speed, challenged the students through a series of multiple choice questions and ended in additional written questions for the tie-breaker.
ISC-Sharjah students Anan Mahmoud, Grade 12, and Haig Cholakian, Grade 11, won first place at the mathalon as one of three 2-person teams from ISC-Sharjah. They scored 18 out of 20, which exceeded the runner-up team by four points. As winners of the event, Anan and Haig each received a 50% scholarship to UOWD, which is valued at 125,000 AED (USD 34,000), a trophy for the school, and recognition in local news outlets.
Success at the mathalon was the result of a school-wide effort at ISC-Sharjah. Prior to the competition, the SABIS Student Life Organization® (SLO®) organized their own mathalon at the school, where the final three teams earned the right to compete at the UOWD event. Two math teachers also volunteered their free time to train the ISC-Sharjah teams and help them understand the basics of the competition.
Both students were appreciative of their schools’ support and the outcome of the competition. “If it wasn’t for our school’s support we wouldn’t have made it,” stated Anan. Haig said, “It was like a dream come true and I was proud of us, and even more proud and happy for my teachers and my school.”