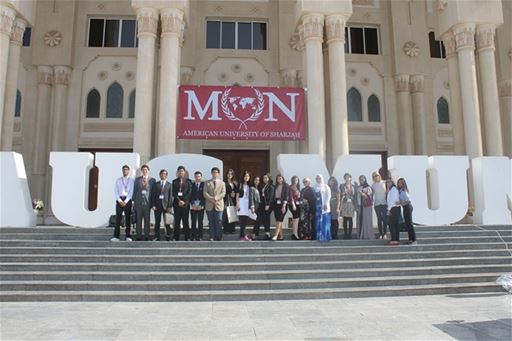 AUSMUN is an event based in the American University of Sharjah, with over 600 students participating from around the country. During the event students recreate the committees of the United Nations by discussing and debating a wide variety of topics, and attempt to fix worldwide issues with a range of resolutions. Each delegate represents a country on a committee that works within the UN, they must act as if they are the ambassador for their assigned country and must represent it by following its laws and foreign policy according to pre-researched information. Delegates in AUSMUN compete to attain the Diplomacy Award; an award given to the best delegate. In order to earn the Diplomacy Award, delegates of each country should be good speakers, good leaders, as well as good decision makers.

This is the second year that ISC-Sharjah attended AUSMUN and with over forty students ranging from grades 10-12, ISC Sharjah was in attendance with great force. Students from ISC Sharjah began preparing and working on their research papers two months’ prior the event, and had worked hard on presenting well-researched position papers and reliable information. All students had been put into different committees, discussing different issues and resolutions.

This year the competition was tough, but two students from ISC Sharjah attained two awards. AUSMUN was a competitive and even life changing experience for all the participating students who got to look at some of the serious issues affecting world leaders today